In this post we will discuss about correlation coefficients. These metrics are very important in the modeling process since they can help you understand the relationships between continuous and/or ordinal variables. However, there are some caveats that we will explain shortly. 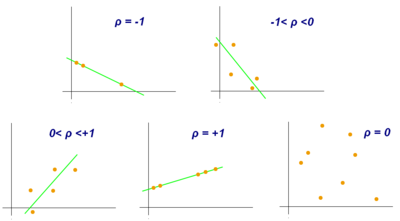 Spearman is a coefficient for measuring the relationship between two continuous or ordinal variables. Here, the difference between the pearson coefficient is that it measures the monotonic and not the linear relationshipa between two variables. In a monotonic relationship, two variables can increase or decrease simultaneously but not at a constant rate. The spearman correlation usually is denoted with the Greek letter ρ (rho). Below there are some examples of pearson and spearman correlations:

Which one to use?

[1] A comparison of Spearman and Pearson correlation methods